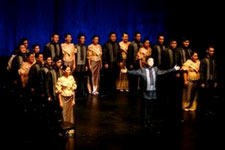 The University of the Philippines Madrigal Singers (UPMS), the two-time European Grand Prix for Choral Singing winner, shared their angelic voices for the Shrine of Jesus, The Way, The Truth and The Life benefit concert held at the Tanghalang Nicanor Abelardo (Main Theater), Cultural Center of the Philippines last October 25, 2008.

Entitled “Shining Through”, the concert marks the 10th Fiesta Celebration of the Shrine. Furthermore it aims to help the UP-Philippine General Hospital (UP-PGH) Pediatric Cancer Ward patients and the Shrine’s pastoral projects, which include assistance for the elderly and retired priests and inhabitants of Hospicio de San Jose.

Bro. Emmanuel Luis Bayan, head of the Education Ministry of the Shrine of Jesus, prays that this will jump start a series of fund-raising projects for the Shrine to have additional means to share God’s love to the less fortunate.

UPMS choirmaster Mr. Mark A. Carpio, on the other hand, hopes that through the concert, its members were able to share their love for music and help raise funds for the Shrine. Celebrating its 45th year since its establishment in 1963 by National Artist for Music Prof. Andrea Veneracion, the group is still focused in creating good music for other people.

Rev. Msgr. Roberto C. Canlas, rector of the Shrine, thanks the countless people who made the event a success. “It is a noble project in the sense that we are not the beneficiaries. The beneficiaries are people who need our care, who need our love, and who also need our financial assistance. We should be able to see Christ in the presence of others,” he adds.

Furthermore, Msgr. Canlas believes that the Shrine shall serve as an “oasis in the desert of spiritual growth” and will serve as a source of inspiration “where people can come amidst the busy life of the metropolis and the commercial area.”

The Shrine of Jesus, The Way, The Truth and The Life, located in Central Business Park at the Reclamation Area in Pasay City is based on the vision of the late Pope John Paul II in his visit to the Philippines during the World Youth Day in 1995. Due to the overwhelming number of attendees during his mass held at the Luneta Park in Roxas Boulevard, the Pope expressed his dream of establishing a church for the youth. During the mass presided by the Holy Father, then Manila Archbishop Jaime Cardinal Sin, DD handed down a stone, which the Holy Father blessed and stated that the stone shall serve as the cornerstone of the church for the youth.

The construction of the shrine was spearheaded by Cardinal Sin. The land in which the Shrine resides is donated by Felicidad and Henry Sy of SM Prime Holdings. The stone blessed by the Pope was placed at the altar of the Shrine. On July 9, 1999, the Shrine was finished and consecrated by His Eminence with Apostolic Nuncio Arch. Antonio Franco, DD, Cebu Arch. Ricardo J. Cardinal Vidal, DD and other bishops of the Philippines. In October of the same year, the Shrine celebrated its first fiesta.

The Sweetest Wedding Expo is back on Sept. 24-25 in Bacolod

Having a Highly Personalized Wedding

The Wonders of Aerial Photos and Videos According to Val Porras...