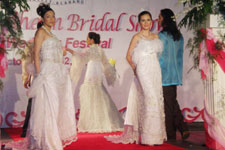 The best photographers, caterers, gown designers and service providers from Southern Manila display their best work during the First Southern Bridal Show –A Wedding Festival held at the Activity Center and Mini Trade Hall of Festival Supermall in Filinvest, Alabang from October 10-12, 2008

Organized by Philtrade Exhibits and presented by Filinvest Land and Festival Supermall, it aims to present the best wedding products and services from Paranaque, Muntinlupa and Las Piñas City, which comprise Southern Manila. Providers from Southern Luzon, such as those from Cavite, Laguna, and Batangas participated in this event as well.

A total of 80 exhibitors from various fields were in attendance to the two venues. Soon-to-be couples were given the chance to ask for advice on legal aspects and requirements for marriage courtesy of the Muntinlupa City government. Guests and couples were greeted with vintage cars; one was an authentic 1947 Jaguar Mark V courtesy of Don Robert’s Bridal Car. Exhibit areas and walkways serves as still runways for gowns made by Ines Juni, Fashion Forward and acclaimed designer, Rene Salud. 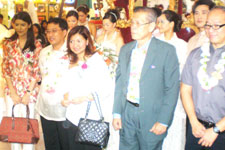 Mrs. de Rossi-Ledesma lit the Mother Candle to begin the opening prayer. After which a bridal fashion show commenced showcasing the works of local couturier Jun-jun Cambe. The ceremony was concluded with the ribbon cutting and butterfly release courtesy of Acclaim.

According to Igi Caluyo, Events Organizer for Philtrade Exhibits, they decided to focus on the southern area because of the abundance of suppliers and resources present in the area. Moreover, this part of the metro hosts some of the notable venues chosen primarily for weddings. Such venues include Leslies Tagaytay, Bellevue Manila and Fernbrook Gardens.

He added that wedding service providers from the northern part of the region have ventured in establishing branches of their business in this area. Aside from this, real estate companies have invested on lands in these parts of the metro; ideal for couples who are looking for an affordable place of their own.

Caluyo hopes that this bridal fair will allow south-based suppliers to open up to a larger market and expand their business in the coming years.

The Ins and Outs of the Terno

Walk Down the Aisle of Before I Do Bridal Fair