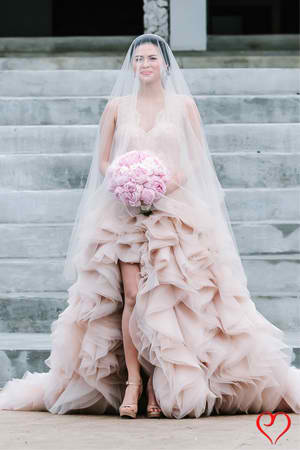 The venue for the wedding ceremony was packed full of anxious friends and family. It was star-studded to say the least. A popular celebrity gossip TV show from one of the major local broadcasting networks was even doing a live broadcast. But rain showered on the scene which caused the bridal march to be delayed for an hour. Lara was stressed. Coordinators then gave the couple an ultimatum. By 5 in the afternoon, Lara will walk down the aisle regardless of the weather, even if it would mean bringing an umbrella. But by 5 in the afternoon, the rain had stopped and the entourage swiftly breezed down the amazingly crafted aisle. The stunning bride then made the walk towards the rest of her life.

According to wedding photographer Eugene Martinez, this was the setting at Marco Alcaraz and Precious Lara Quigaman’s wedding just minutes before the ceremony started. Just like any other wedding, anything can happen regardless if you are a celebrity or not. But with great timing and God’s blessing, the wedding pushed through and became one of the most talked about weddings of the year. Fortunately, for Eugene Martinez, he was chosen to be the one to capture it all in film.

Eugene explains that the celebrity wedding that he covered was actually a 3-day shoot. He was at the venue, Hacienda Isabella, early on to shoot the details and the preparations before the actual wedding. Eugene explains that he really intended to capture all the behind the scenes of the wedding from being nothing to turning into something so grand. Being a guest photographer of the wedding, he had a rather different approach in mind that would make him stand out from the rest.

However, celebrity weddings tend to be more challenging according to entrepreneur/photographer Eugene Martinez. For one, he simply cannot direct the two young celebrities like how he has directed other couples. He was dealing with celebrities with significant experience in the fashion industry. The last thing he wanted was to look like an amateur.

It was also hard for Eugene to keep the couple in one place as the wedding was much like media frenzy. Interviews from the media were pulling both Marco and Lara from left to right. Although difficult to put the couple in one place, Eugene knew the right people to talk to, to help him get a few minutes with the couple to get his shot. According to the photographer, it was his key to his first celebrity wedding.

Although he already had specific images in mind, Eugene explained how complicated things got during the wedding itself that prevented him from attaining shots that he wanted for the couple. Being a guest photographer, he also didn’t want to impose locations that he wanted for the couple in order to avoid having a bad relationship with the other photographer. But at the end of the day, Eugene proudly claims that he was able to manage it all.

Eugene’s strategy was to take as many candid moments as possible. Eugene had already established a good working relationship with the couple during their pre-nup session. The couple was indeed impressed with Eugene’s unique style in photography that they invited him to be a guest photographer in their wedding. The pre-nup session also allowed Eugene to gain the trust and confidence of the couple. He proved that he knew what he was doing and was a professional at it. Luckily, the impression Eugene made on the couple was well-established as before he knew it, Marco and Lara were already calling Eugene by his first name.

During those three eventful wedding day shoots, it was during the preparations that Eugene enjoyed the most. “It was like behind the scenes of a movie or telerserye; you will notice how hands on the couple really were with the preparations. Actually, the day before the wedding was even more exciting than the wedding day itself for me”. In fact, Eugene had a hard time compressing all the preparation photos as there were just too many good ones.

It was also during the preparation process that Eugene felt the love of two ordinary people. Eugene explains that it was here when he got to know the couple on a more personal level. It was capturing Lara working on her laptop or Marco calling some of his best buds that made the behind the scenes photos very special. They were not celebrities during the preparations. They were two normal people coming together as one in the name of love.

If you want heartfelt wedding photos like Precious and Marco, choose Eugene Martinez Photography. You can visit his profile in Kasal.com today!