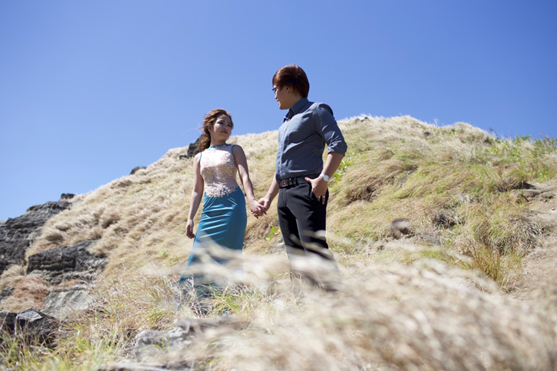 My name is Glenn Posadas, and my fiancée is Diana Rose Custodio. Here’s my story, I hope you find this interesting:

The story would make more sense if I start with our story.

The first chat. She sent me a friend request on Facebook 4 years ago. She saw my name on her friend’s photos with watermarks, coz back then I was a freelance photographer. She wanted to try out being a model lol. 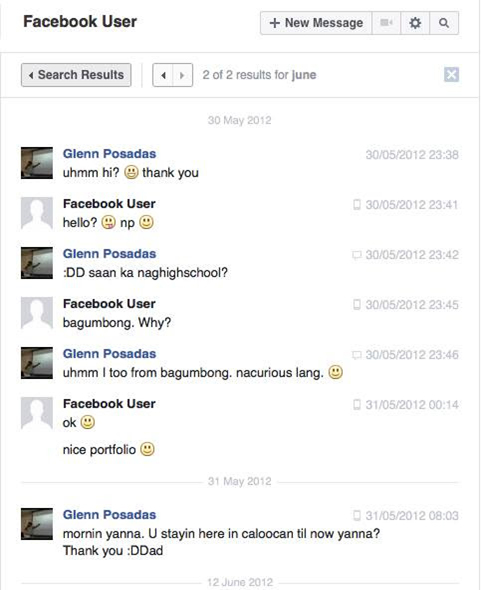 Next is our landian with kilig moments, I was still a student back then. 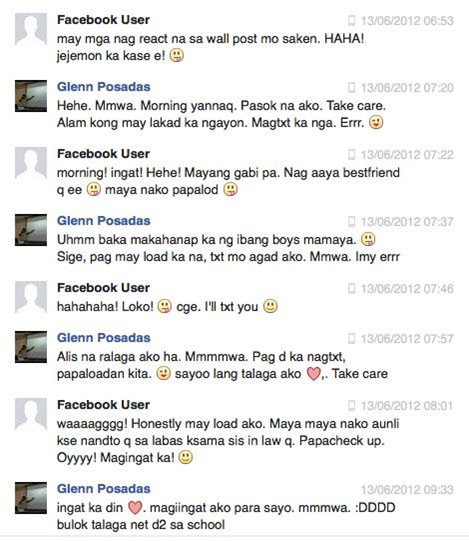 THE BEGINNING OF OUR RELATIONSHIP 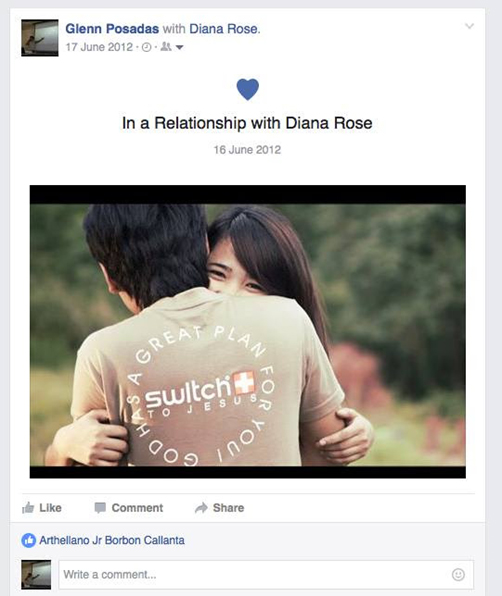 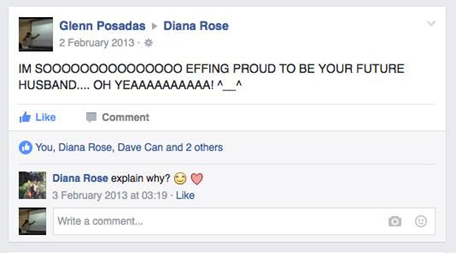 This was the time I made a promise to my self that I should propose to her exactly or not more than 1000 days from that day. I hope she can still remember that promise when the day comes. 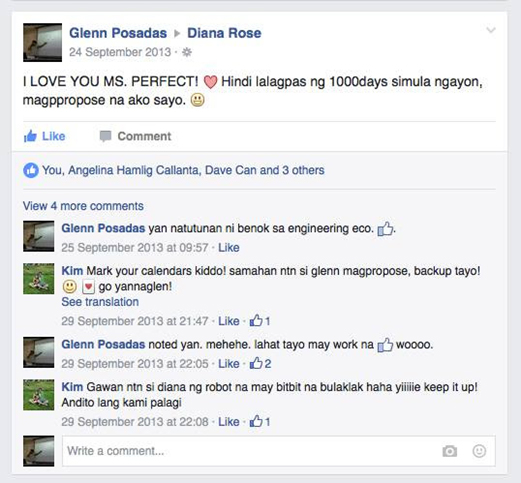 My classmate even computed when would be the 1000th day!!! LMAO. Thanks to our subject Engineering Economics we’re having back then HAHA. 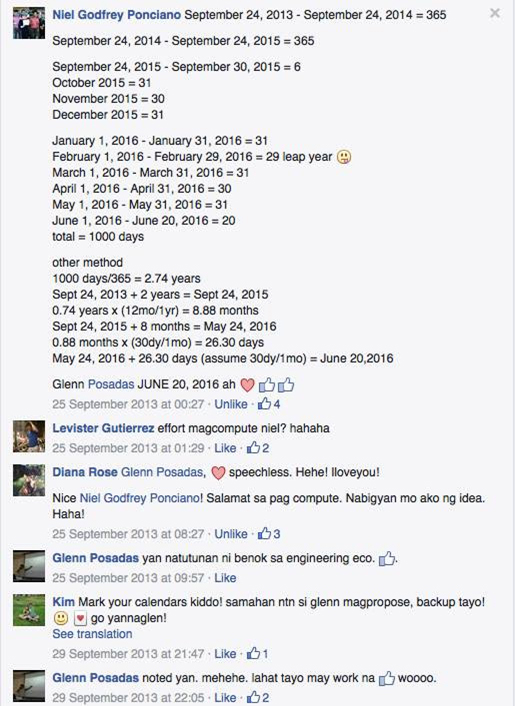 3 days left before my planned proposal, yes, on my 999th Day – Fathers Day.

I actually thought about renting a chopper! Yes, a chopper. FYI, that would cost me approximately PHP 11,000.00 for 5 minutes! That’s crazy, right? We could die too in riding a chopper and shatter our dreams, just kidding.

2 days left before the 999th day, I 100% dumped my original plan – the Eco Park thing. I told Roxy that I will take her suggestion, a dinner with my family, my fiancee, and my fiancee family. At that time, I didn’t have the plan to play a song with a guitar and bring flowers as part of my wedding proposal. I just wanted it to get done.

Name of the restaurant: Romulo Cafe in Jupiter, Makati City.

Here’s the message of Roxie to me before the proposal, she’s such a good friend.

After Roxie’s office hours, she called the restaurant. She reserved seats for me. I think she was very excited than I was as that time lol. She mentioned as well that there’s gonna be a song to be played when I kneel before my fiancee, and that song would be A thousand years – Christina P.  The dinner would be at 7:00 PM, Sunday.

FRIDAY NIGHT
When I came home, I was thinking if I should play a song using a guitar, and what song I should sing. I am a terrible singer and have a unpleasant singing voice, believe me. I chatted some of my friends on Facebook and asked them if they have a guitar and if I may borrow it. They all said that they have no guitar even though I was willing to pay for the rental fee. Here comes Bryan Lingat, my former classmate in college, and a very good friend of mine. He was willing to borrow a guitar from someone and give it to me. Alright, so all things were set at that moment. About the flowers though, I was still undecided.

SATURDAY NIGHT
When I mentioned to my family that I will be needing a guitar and that I am renting one via my friend Brian, my cousin named Cazandra overheard it and told me that she got an acoustic guitar and it produces sounds better than my old sounded Fernando small acoustic guitar. I then sent a message to Bryan immediately to not bother borrowing a guitar from his friend anymore and I was very thankful that he tried to help me. Before the clock reached 10:00 PM at that night, I contacted the Romulo Cafe via phone to double check my reservation, the lady found no reservation under my name and told me that I was calling the Quezon City branch of that restaurant, she then gave me the Makati City branch telephone number. So I called that number and to my surprise, the lady of that branch told me that there’s no reservation under my name. I panicked. I told Roxy what happened, and she was ready to contact the restaurant on Sunday morning to double check it.

SUNDAY MORNING,
Romulo Cafe opens at 10 AM I think, but I called them a bit earlier than that because I was anxious to know if there’s no really a reservation under my damn name. The lady over the phone confirmed my reservation and I told her to make it 14 persons instead of 10, also, I told her that I will propose to my fiancee.

SUNDAY AFTERNOON
At this time, I was very nervous, in a few hours, I will meet her and both of our families will meet each other. Damn. I prepared very well, I brought the engagement ring to my bag, brought money as well – Oh, I almost forgot to mention that I decided to buy a bouquet.

HERE IS THE BOUQUET I BOUGHT 🙂 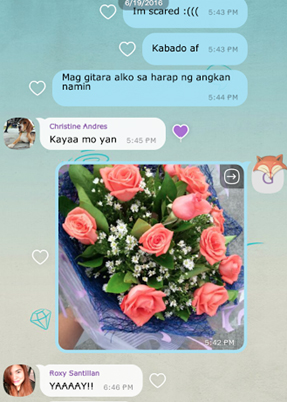 I was running to the flower shop in Cubao, Quezon City, where you can find affordable flowers, and not to mention, fresh and beautiful. I bargained with the flower girl in that place although I was a bit late. Again, the dinner is at 7:00 PM. 5:40 PM, I told Roxy and my other colleagues that I was really scared and I would play a guitar song. I was fckin scared, nervous, anxious, although I was 99.9% sure that my fiancee would say YES. I was feeling all these because I would have to play a song with a guitar in front of many people including our families, and to remind you, I am a very bashful / shy type of a person.

I arrived in Ayala station / Makati, I was waiting for my Uber. My photographer, named sir Kiko arrived at the venue at exactly 6:00PM, wow! I was still at the train at that time. There are reasons/things happened to me at that moment that could have f*ckd up my wedding proposal.

1. Uber drivers didn’t bother to call me to know where the hell I was.
2. I didn’t have a load or any way to contact the two or three Uber drivers I tried to have a book with.
3. I mistakenly placed the arrow in Uber inside a builder, that arrow indicated where I was.
4. After 3 unsuccessful attempts, I was already freakin late and this damn Uber banned me from booking for a certain amount of time.
5. I then tried booking using Grab. The driver I tried to book with was far. So I went to a taxi area and damn, it was a wrong taxi area, the taxis in that place are heading to the non-Makati places.
6. I went to the other area where taxis are bound inside the Makati. I was freakin late at that moment! My family, my fiancee  my fiancee family, and my photographer were already there at the venue and here I was at the long line of people waiting for regular taxis. Okay, time came, thank you Lord for giving me a cool taxi driver.

To make the long story a bit shorter, I arrived to the place. Thanks to the driver, he knows the place. When I left the taxi, the receptionist noticed that I got a beautiful bouquet and asked me if I was the man who’s going to do a wedding proposal, and I said yes. I then explained to that lady and to their “technician” the plan:

I will go to our table, greet the family members and my fiancee  will excuse myself pretending that I will need to go to the comfort room at the 1st floor, but the truth is, I was going to get the guitar and the bouquet. We had our dinner at the 2nd floor, the nicest part of the restaurant. I brought my cousin, the owner of the guitar at the 1st floor and I took a quick practice of the song. Thanks to the Lord God for not letting my fiancee go down to find me haha! Alright, at this moment, my heart was pounding out of my freakin chest. But I was already there, #YOLO! My cousin was holding the flowers, and I put the guitar’s belt on to my shoulder and we went upstairs.

Here myself comes, damn, I talked to my photographer quickly before I entered the dinner place, talked about the plans on how he will take photos of my fiancee  I already discussed to him that I hired him, sir Kiko to just capture the emotions and reactions of my fiancee during the event. My fear wasn’t able to hold me back and bam! I walked straight to our table, in front of her, I started strumming the guitar and started singing the song: Grow old with you – Adam Sandler.

THESE ARE THE PHOTOS FROM MY PHOTOGRAPHER:

CUTE REACTIONS hihi. That was during my embarrassing presentation hehe. 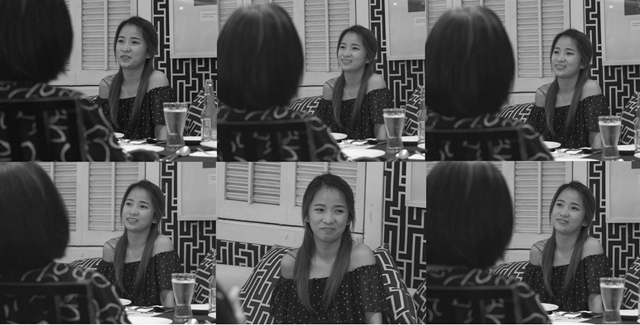 During the refrain part of the song, which is the “I’ll miss you, kiss you, give you my coat when you are cold, need you, feed you, even let you hold the remote control…” I cried. I couldn’t help it but to fckg cried during the performance. Some of the family members nearly cried, or cried too. haha! After singing the song and playing the guitar,  the song A thousand years played and I asked for her hand and walked her into the spacious part of the floor, gave her the bouquet, kneeled before her, brought out the ring, got her other hand, and asked the question: “WILL YOU MARRY ME?”.  She then replied: “OO NAMAN (Yes of course).” Bam! Next song: Saving forever for you – a man version from Spotify. Then I kissed her quick, and hugged her really tight while still crying and then I heard the whole crowd clapping their hands. It felt great! Some people after the dinner even congratulated us. Wooo! Thank you mahal. I love you so much!

THIS IS US IN OUR RECENT PRENUPTIAL SHOOT 🙂

Thank you so much.

Names of the engaged couple: Glenn Von C. Posadas and Diana Rose D. Custodio
Target Wedding Date: May 8, 2017
When & Where the Proposal was held: Romulo Cafe in Jupiter, Makati City

What You Need to Know About Anne’s Bridal Look