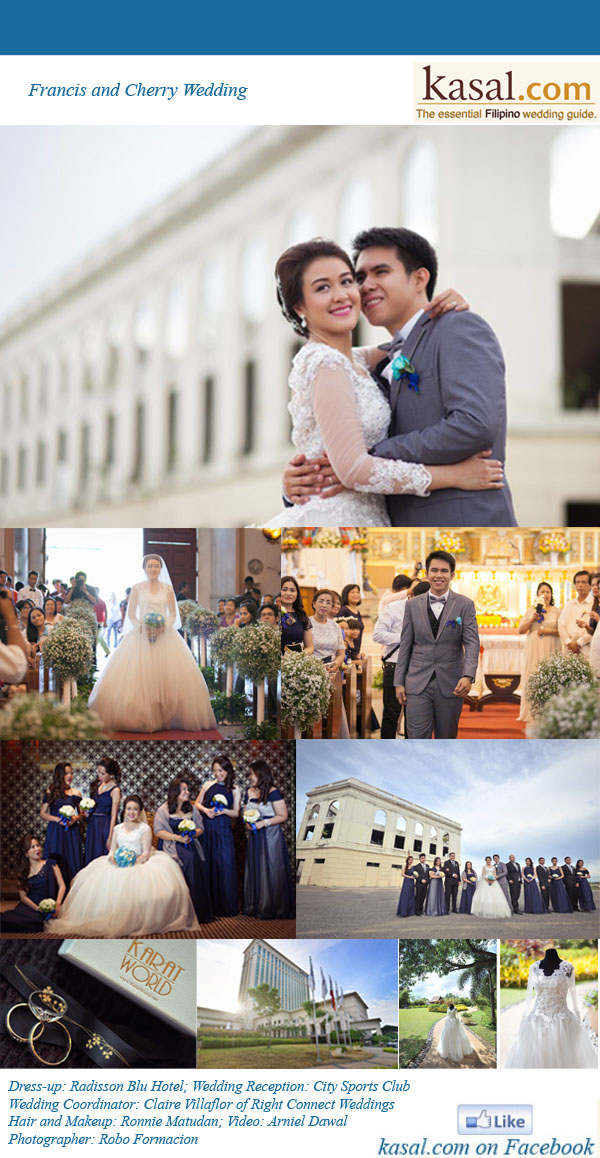 Love is mysterious. Sometimes, you will just meet one person and feel as though you have met her for a very long time. And then, you fall in love.

Francis and Cherry were introduced by a cousing during an event. However, they just exchanged a couple of hi’s and hello’s. Later on, Francis’s cousing borrowed his phone and sent a message to Cherry, giving her his number. Eventually, they started exchanging messages. They got along very easily. In fact, Francis felt as if they have already met before.

Soon, they started to have a relationship until eventually they decided to tie the knot. It was after Francis proposed to Cherry on the Christmas of 2011. It happened in a breath-taking rest house, overlooking the bright lights of Cebu City. There were also rose petals all over the place, and romantic candles. They had a dinner.

However, it was just in 2014 that the wedding pushed through. They realized that 2012 would not be a good year for them, since a lot of relatives could not go back to the country to join them. The year 2014 was not also good, according to them, so they decided to just hold it in 2014.

Good thing, everything proved to be worth the wait. The wedding turned out simply how Cherry wanted it to be—magical as a fairly tale. It made Cherry really happy because she has always been fascinated with princes and princesses, as well as wonderlands and the idea of a “happily ever after.” They also incprporated their favorite color, which was blue. They chose midnight blue in particular and mixed it with silver.

The couple was about 95% hand on. But of course, they did not really know how to begin at first. They did not have any idea where to find good suppliers, so they hired a wedding coordinator to help them with the planning and budgeting. They also sought tips from their families, such as Francis’s mom and sisters. They picked Ms. Claire Villaflor (Coordinator), Cherry – Becketts (Entourage), Arnerl Dejos (Florist and Designer), Ronny Matundan (Hair and Makeup), Arnel Dawal (Videographer), Thess Caindic (Lights and Sounds), Karat World (Wedding Ring), and Chedz (Cake).

Almost the same thing happened when they were looking for a photographer. They did not have much idea, so they just searched online using the keyword, “best photographers in Cebu.” Although they also talked to other photographers, they chose Robo because of his credibility as well as his greatness. They were also warm, which made working with them truly great. In no time, they felt comfortable being with him and his wife Caroline.

Sure, they also encountered a couple of problems along the way. Making big decisions was sometimes stressful and mind-blowing. But what mattered in the end was the fact that they still managed to make things happen according to their plans. In fact, their guests loved everything about it.

Ryan and Leizel’s Prenup Shoot at the National Museum of Natural...

Wedding Venues in the City of Stars